I grew up a middle class white boy who never himself suffered racial injustice.  I grew up in the context of desegregation efforts in the school system in Louisville, KY, but I did not know the real struggle in my own personal experience. 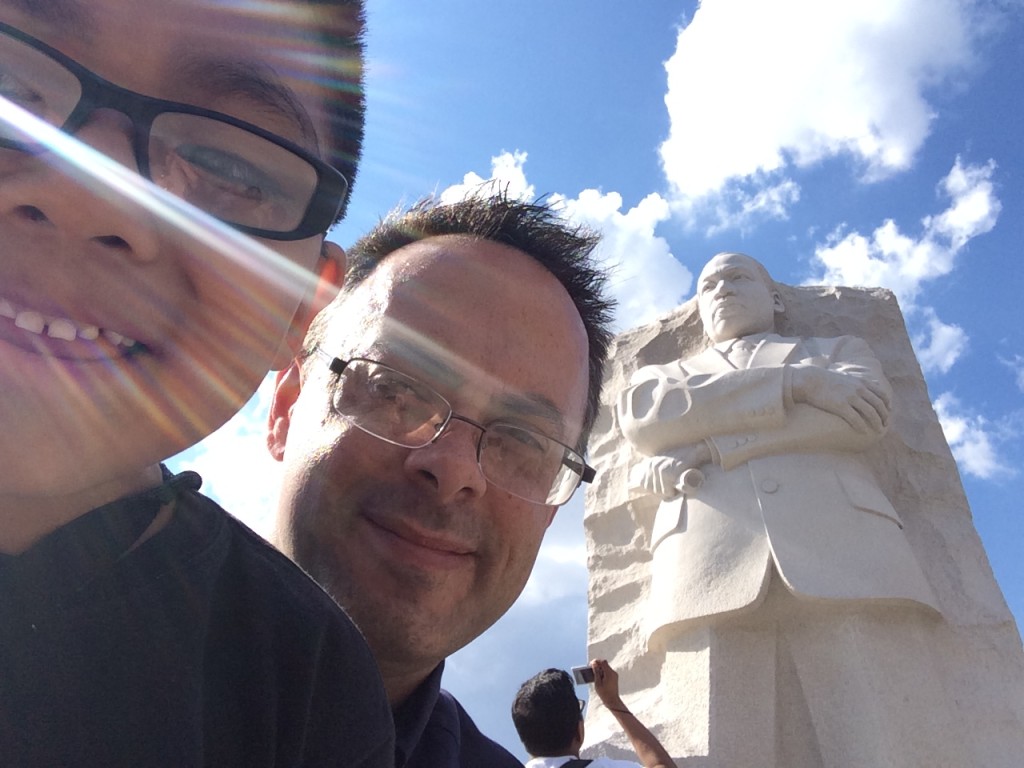 Today I visited the memorial of Dr. Martin Luther King Jr. in Washington, D.C. with my youngest son.  Seeing that memorial made me think of the ways my life and view of the world have been shaped by this man and the movement he represented.

I grew up in the generation just following King’s life.  I was born in February 1968 and was only 6 weeks old when King was martyred on April 4th.  I never had the privilege of seeing him for myself or even joining my efforts in his movement.  And yet my world view would be shaped by his words.

My mother and my mother’s family always sympathized with the Civil Rights movement.  And it was my mother and father who refused to let me look through racial lenses on the world.

It was fourth grade and I was playing on the playground with Robin, one of my very best friends at Montrose Elementary School in Bexley, Ohio.  To my memory, Robin was the only African American girl in our grade, if not in the entire school.  She had played at my house and I had played at hers.

My parents had wanted to see King’s vision (spoken only a little over a decade before) of a nation “transformed into a situation where little black boys and black girls will be able to join hands with little white boys and white girls and walk together as sisters and brothers.”

That vision was being fulfilled in a new generation on that playground that day.

But I will never forget the jarring moment when our play was interrupted as a white boy approached my friend and called her the “N” word.  I can still remember the nauseous and confusing fear I felt in my stomach and the tear I felt in my eye.  It was my Mom later that day that would help me process that racial moment as she spoke out of the well-spring of King’s vision that she had heard just 5 years before I was born.

I always remember our family recognizing the important place King’s leadership played in forming our nation’s conscience.  I was perhaps between the ages of 12 and 15 when my Uncle Mike took me to the Philadelphia airport to put me on a plane back home after a visit I had made to family.  We were walking through the airport when he pulled me behind a pillar and pointed hastily toward a motorized passenger vehicle carrying a lone stately looking African American woman and said “Greg, look that is Coretta Scott King, Dr. King’s widow.”  Wow!  That was a moment.  I had seen someone, whose husband had helped shape the cultural conscience of the Nation.

King stood, most specifically, for the racial equality of African Americans, but called upon the founding principles of this nation that would help us work to tear down prejudicial walls for all races.

King said, “When the architects of our republic wrote the magnificent words of the Constitution and the Declaration of Independence, they were signing a promissory note to which every American was to fall heir.  This note was a promise that all men would be guaranteed the inalienable rights of life, liberty, and the pursuit of happiness.”

King spoke, “I have a dream that my four children will one day live in a nation where they will not be judged by the color of their skin but by the content of their character.”

Those words have shaped my generation’s view of the world and view of the ultimate insignificance of the differences in our skin’s color.

We live in a world where we had better get comfortable being inter related with people from all tribes and tongues.

Today I thought, “Here I am, standing in front of the monument of a man who fought for racial equality, with my son, my adopted son from a different race.  My skin and his are different, but we live in a world where it is now very much acceptable for me to be his dad and him my boy.  Thank you Dr. King and so many others who fought for us to view race thru eyes of love.”

Question:  How have the words of King impacted you and your view of the world?  You can leave a comment by clicking here.